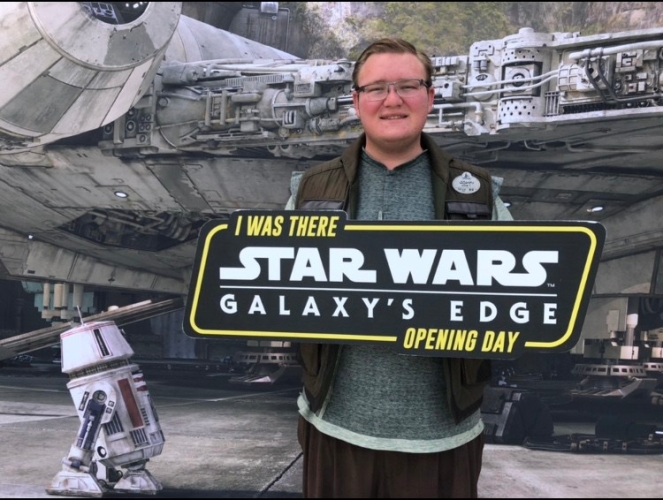 Alright, so, I’m back on track this week with my weekly post. FINALLY!!! Yea I know, I know, but lets just enjoy this one, shall we? To start off, to everyone, as you probably can tell, I am safe from the hurricane that was supposed to hit Florida just a few days ago. If you haven’t been keeping up with it, at first, it was expected to be a category 5 hurricane and was sought to be “one of the strongest hurricanes on record.” Initially, it was supposed to hit Florida on Sunday night-Monday morning, but with it moving at a blazing 1 mph, it all got pushed back a day to hitting Monday night-Tuesday morning.

Well, after all the commotion and all the prepping and even getting a paid day off work for it, Dorian did not hit me here in central Florida. In fact, there was little to no difference in the weather these past few days. The only difference? Just a little bit more windy than usual, but when you grew up down the street from the Windy City, you’re really not batting an eye.

At the end of the day though, the show goes on and I am safe. Even the after effects haven’t been there really. It’s rained a little, has some sharp winds throughout the day, but overall, just another day in paradise here. Now that that’s over, lets get on it with it.

In the past week, I have had some fun experiences and have been able to enjoy myself every second of every day. If you didn’t get the chance to read my first article before beginning my Disney program, I mentioned in that post that my entire life, I have struggled with the feeling of acceptance. Since beginning my program, it took me awhile to find, I guess the “right people” for me, but I’ve found them.

Since making the move over to Galaxy’s Edge, I have been extremely blessed to be working with such a tight-nit group and really a big happy family. Like I said in my latest post, I enjoy going into work everyday and don’t fear a damn thing like I used to at my old location. I have a lot of friends, people who I enjoy being around for majority of the day and couldn’t be happier to be in the location I am in.

With those people, I’ve been able to enjoy different and new experiences. For example, I finally went to the Food and Wine Festival for the first time with them and got to have a sleep over at a friends apartment as well. Life has been good and steady and like every week, I can’t wait to see what the future holds for me.

My Disney Adventures list has been cut down to three parks now instead of four due to being blocked out of Hollywood Studios, but doesn’t mean my adventures end by any means. Sitting here today, Hollywood still has a solid lead with me being there 13 times throughout my program, Magic Kingdom and Animal Kingdom following suit in a tie at nine times and Epcot rounding things off with seven. Although I miss going to Hollywood and can really use a drop on the Tower of Terror right now, I’m hopeful that in the near future, our block out will be lifted and I can continue to go to my favorite park again. 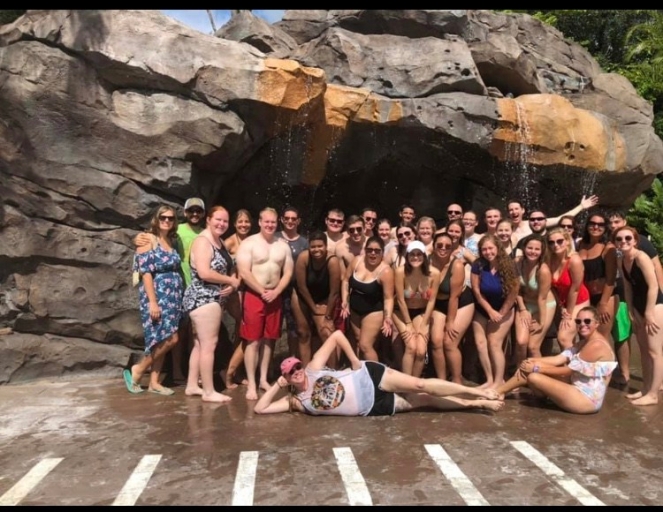 To begin this segment, I’ll start off with the best one I had, which was exploring the Food and Wine Festival for the first time ever. Growing up, when I went to Disney, it was purely for the atmosphere and for the attractions they have at each park. I didn’t really care about the parties they have on Halloween, Christmas, things like that, and the festivals and what not. However, as you grow older, your mood begins to change, and in my opinion, you’re life gets too boring if you never experience new things.

So, this past week, I went to EPCOT to enjoy and try all the different foods and drinks from all the different countries. In total, I was able to get chicken from Italy, a Bailey’s Chocolate milkshake from Ireland, a Belgium waffle (you can guess where that’s from), a margarita from Mexico, some cheese bread from Brazil and a pice of a filet from Canada.

All I have to say now, is I am a huge supporter in the F&W Festival and would recommend it to anyone and everyone. It’s a great way to try new things, get full and most importantly, break your bank account. In which, I learned the best way to go about it is to buy a gift card and then use that as you go around so you can control your spending as much as possible.

The last first thing I did this past week (yea usually there’s three, but sort of hard when you work three straight 12-hour days) but was go to the Finding Nemo attraction for the first time on my program. Now, many might sit there and be like, “John, really?” especially my fellow Disney lovers out there, but this time was different. In this case, we went right before they stopped letting people on because it was closing, and after the ride itself, got to look at all the fish and stuff they had there.

Don’t ask me why, but I completely forgot at the end of the ride, they had huge tanks of water for sharks, dolphins and numerous different fish as well. Again, don’t judge, but there was something that was very satisfying in watching all the fish go around and look for all the dolphins and sharks within the tanks as well. Not everyday you get to see animals like that, especially considering I haven’t seen a dolphin since I swam with them a few years ago in Atlantis. Also, another great thing that came out of it was being able to see a huge turtle swim around as well.

Not everyday you get to see a huge turtle around and inside one of the bigger tanks, there was one sitting on the bottom for the longest of times. Before we left though, it finally got active and started to move around. Which, is a great sight to see especially given the attraction we just went on. Would be a good amount of money that his name is crush haha.

As a whole, the experiences have been great and I literally am living out my Disney fantasy every single day. I know it’s still a ways to away, but I don’t want January to come! 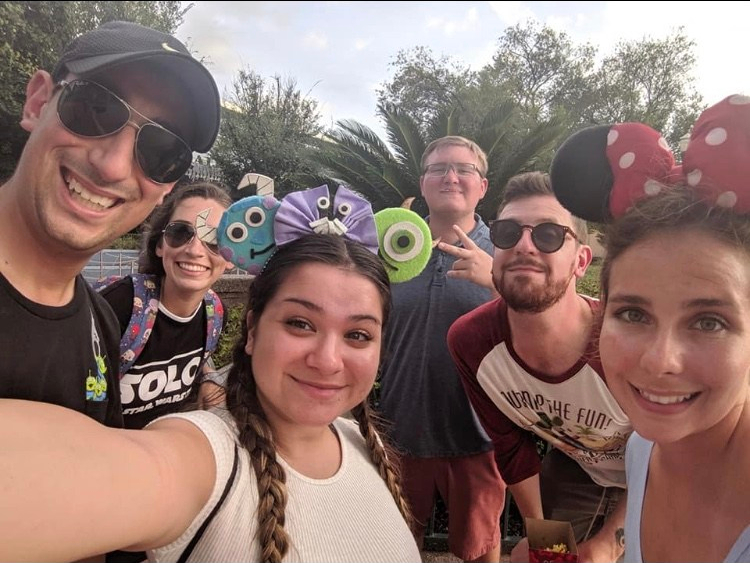 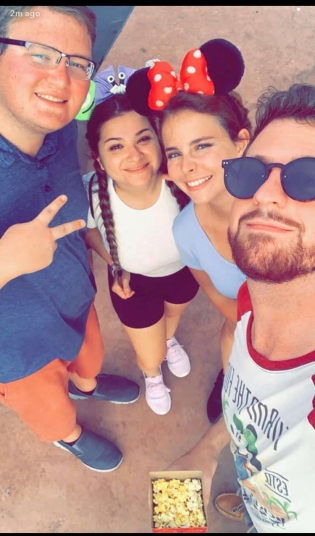 Highlight of the Week

This really is a no-brainer for me; a week ago today, Galaxy’s Edge opened to all other planets for the first time. It was a real honor to be apart of the opening day team and the first few days, although were crazy, was an absolute blast. Being there seeing everyone’s reaction was amazing for me and am so proud to have been given this opportunity.

To be more specific in this HOTW, one instance during the first few days stood out amongst the others. On opening day, I was a greeter for the Cantina, meaning I was in charge of making sure people had reservations and if so, checked them in, as well as helped take walk ins when we were able to. At that time, it was within the final hour of us being open, a traveler came up to me asking if they can still get in without a reservation. After looking up and seeing where the line was, given the length, I was able to get them in. After saying I could, the lady (who was a huge Star Wars fan btw, whatever that is) literally started breaking down crying because she was so happy to get on inside. After doing so, I told her not to cry and that everything was fine and she should be excited! With saying that, as the tears were still coming, she asked for a hug and thanked me endlessly for letting her and her family inside.

That made my entire day, especially being a few hours ago, I had a not so happy experience with a traveler that really didn’t end the best. But, it’s moments like this one that makes working for Disney so special. People literally cry when they see things and come into the their lands and attractions. That’s what Disney is all about and that’s what I’m all about as well.

Thankfully, the next two days went great, in a four day span, I worked over 44 hours and got a good amount of overtime on my check that is looking very nice for me today. My time at Galaxy’s Edge continues to get better and I just love everything about it. My leaders are awesome, my coordinators are wonderful and my coworkers are so friendly and I just wish I didn’t have a deadline with them. With all of this said though, I challenge each and everyone of my friends to take this piece of advice. With working opening day for the biggest expansion to a Disney park ever, I helped make history. By doing so, and this is where the advice comes in, I challenge you all to go out there and do something to etch your name in the history books in one way, shape or form. Not to sound cocky, but I’ll end this post off with a question to think about: I’m making history, what are you doing today?

Also, with today being the start of the NFL’s 100th season, all I have to say is, GO PACK GO!